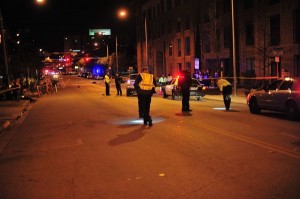 Many of us have woken up to the terrible news out of Austin, TX that a driver fleeing a DUI stop at around 12:30 a.m. local time broke through the barriers near The Mowhawk, near Red River and 10th, and plowed into a crowd waiting outside the club for one of the many official showcases of the annual South By Southwest music festival and conference. At this time, two are confirmed dead with reportedly 23 injured.

Names of victims and the driver have not been released. Police say the driver continued down the street a bit after hitting the people outside The Mowhawk and at that point struck two people on a moped, who are reportedly the two fatalities. The driver attempted to flee on foot but was hit with a stun gun and apprehended by Austin police. He faces two counts of capital murder and 23 counts of aggravated assault with a motor vehicle.

It’s hard to believe this could have been worse, but anyone who has been to the festival in recent years has seen how completely packed the streets can be. Only minutes before the incident, police had cleared the waiting crowd from the street onto a sidewalk.

Our thoughts are with the victims and our hearts go out to the families of those injured and killed.